As fall approaches, so does the normal breeding season for most sheep and goats. Consideration for things like parasite count, hoof health, body condition scoring, and overall health of breeding stock should be evaluated prior to breeding.

Animals with long or damaged hooves should be trimmed before breeding season as well. You should inspect the animals’ hoofs and using a knife or hoof trimmers, remove any dirt, mud, manure, or stones from the hoof walls and then trim accordingly. A strong, rotten smell is often an indication of hoof rot, which can be treated by using a commercially available anti-fungal product.

Body Condition Score, or BCS, is a system used to evaluate the fleshiness of the animal. BCS’s for sheep and goats are given on a scale from 1 to 5 with one being emaciated and five being obese. In order to properly access the BCS of goats and sheep they must be handled. BCS is done by feeling the amount of fat cover over the ribs, loin, and backbone. Michigan State University Extension recommends that does and ewes should be in the 2.5 to 3 range at the beginning of breeding season. Evaluating your breeding females to make sure they are in good condition for breeding is an important first step. Does and ewes that are in good condition, not too thin or too fat, are more likely to conceive and have kids or lambs in the spring. Animals that are too thin will not conceive, have a low twinning rate, and potentially low weaning weights. Animals that are over conditioned have an increased risk of metabolic issues such as pregnancy toxemia during their pregnancy. Over-conditioned animals also have an increased risk of dystocia during kidding or lambing.

If breeding females are below BCS 2.5, then they should be placed on good quality pasture or supplemented with grain at one half to one pound of supplement per head per day for at least two weeks before breeding. Having the does or ewes on a diet where they are increasing weight will increase the odds of having twins or triplets. This is also referred to as flushing. Flushing will not be effective on over conditioned animals.

The health of the does or ewes is important going into breeding season, but so is the health of the buck or ram. It is his job to make sure the females get bred. BCS of the buck or ram should be a little heavier than the females, 3 to 3.5. Many bucks and rams will focus mainly on breeding during the breeding season and will lose body condition as a result. Some producers may also have a breeding soundness exam done on their buck or ram to make sure they are producing viable semen. An infertile or low fertility buck/ram can be the reason for a lower number of females becoming pregnant. 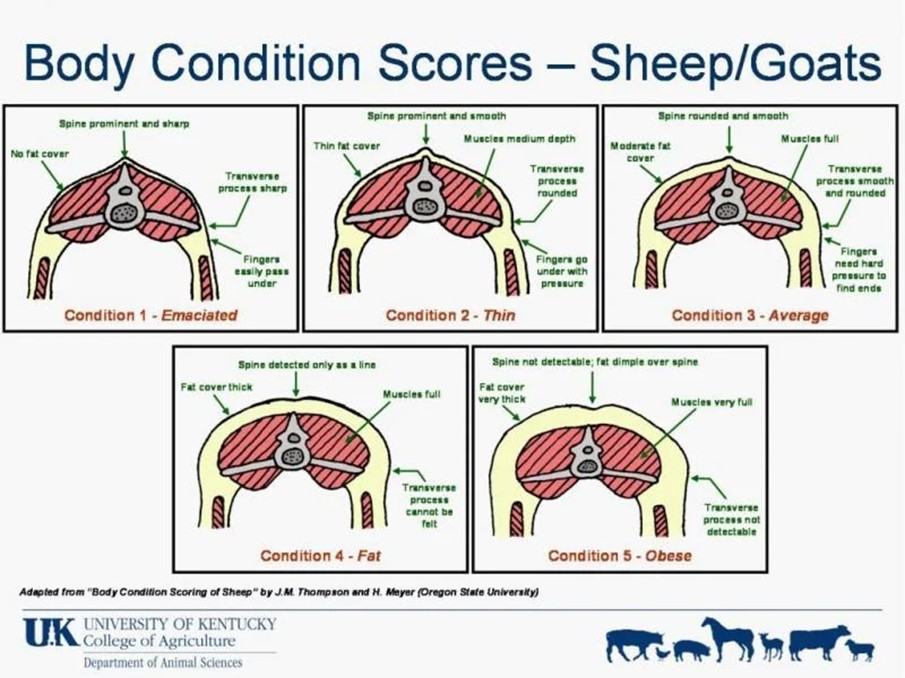